Chinese New Year is a massive occasion around the world. The festival is celebrated by more than 20% of the planet and it typically causes the annual largest human migration!

As well as being one of the biggest events in the Chinese calendar, it’s also one of the longest — the festival typically runs for around 15 days. Many businesses across Greater China close over the period and people use the time off work to celebrate with their families.

The Gregorian date of Chinese New Year is determined by the first day of the lunar calendar and typically lands between mid-January to mid-February — this year, it falls on February 12th.

There are items that have long been synonymous with Chinese New Year — red envelopes, lanterns, fireworks, traditional foods like noodles and dumplings, etc. But other items that may not necessarily be associated with CNY also see an uptick in sales.

Here’s 3 categories that typically perform well over the holiday.

Like most holidays, Chinese New Year is a time of gift-giving, and what gifts do you give to children? Toys, of course!

Many toy brands run promotions in the lead up to CNY. LEGO, for instance, creates Lunar New Year sets to celebrate classic Chinese culture and legends (and to drive sales).

LEGO’s 2021 Story of Nian set, for instance, invites children to learn the old story about Nian with LEGO bricks. It features a brick-built Chinese residence with traditional decorations, a snowy scene that is brought to life with a posable Nian creature, a snowman figure and six mini-figures including grandpa, grandma, three children and a person in an ox costume to mark the new year. 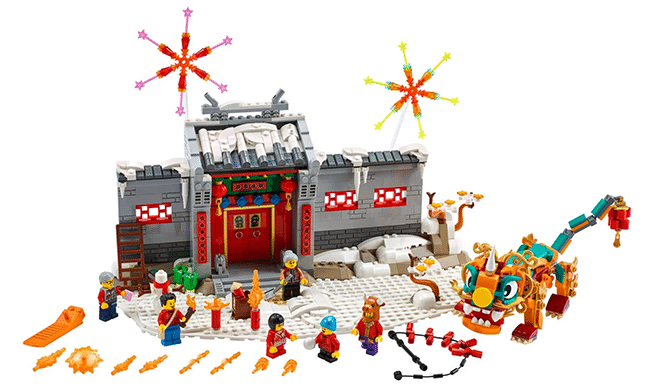 LEGO’s Lunar New Year sets are incredibly well-received by Chinese consumers, thanks— in part—  to their cultural significance.

As with the rest of the world, wine is customary for every ceremony, festival or important dinner — and especially for Chinese New Year!

With the spirit of gift-giving firmly embedded in Chinese New Year, luxury products fly off the shelves — and creating specific Lunar New Year capsule collections has become a “must” for luxury brands.

This year, for instance, many luxury watch brands have launched special edition pieces featuring the ox. Others have woven the zodiac’s attributes into their products — Givenchy for instance, has developed a collection for men and women inspired by the ox’s traditional characteristics — talent, confidence and openness. The ox is also symbolized more discreetly on the zips of some items, while boldly embroidered on other pieces of the collection.

In 2020, one in five British luxury fashion retailers launched specific Lunar New Year campaigns to capitalize on the event. As demand for luxury brands has plummeted everywhere else but China, expect the competition for sales this year to hit an all-time high.

Chinese New Year is one of a number of events that drive e-commerce sales throughout the year. Learn all about China’s most popular annual promotions in this infographic.